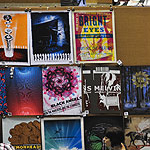 SXSW is upon us – and film and music is in the air! One of the mainstays of the festival is Flatstock, and we’ll be there selling our prints. Co-presented by the American Poster Institute (API) and SXSW, Flatstock 38 will display the works of the world’s top gig poster artists. The show runs March 14-16 and will feature posters of varying styles, colors and techniques for sale by the very artists who created them. (You’ll even be able to hear acoustic sets by a variety of SXSW-curated bands while you peruse!) The best part about it…no badge required. It’s free and open to the public!

The Flatstock shows provide the American Poster Institute with a way to present poster artists collectively while showcasing the breadth of styles they represent. The best concert posters have always captured both the essence of the music they promoted and the spirit of the time in which they were produced. Flatstock provides an ongoing series of opportunities to see fine poster art in person and to meet the artists who created it.

But if you’d rather avoid the traffic and crowds, we’ve picked a few for you to go with the spirit of SXSW. Consider purchasing a print this week – it’s a great way to own a piece of original fine art, support the Serie Project’s Artist in Residence Program, and help maintain the artistic spirit that keeps Austin’s character year-round! 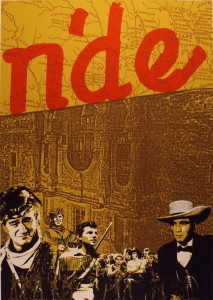 If you Google “Texas film,” this actor may not come up in the search results, but he should, as he is the epitome of the cowboy in Western films, many of them set in the wild west of Texas. John Wayne starred in 142 pictures (in 1999, the American Film Institute named Wayne 13th among the Greatest Male Screen Legends of All Time). Now he stars in this screen print by Emmanuel Montoya, titled “N’de.” We also spot Davy Crockett in the background, another legend of the wild west. Who else do you recognize? 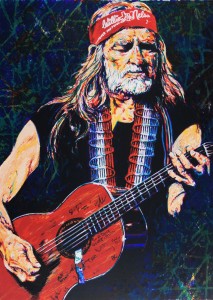 There is country, bluegrass, folk, and then there is TEXAS music. Willie Nelson is definitely considered one of the godfathers of music in the Lone Star State. To make this claim official, Nelson is the honorary chairman of the Advisory Board of the Texas Music Project, and the official music charity of the state of Texas.

Artist Robert Hurst born in Houston, Texas, now claims Austin as his adopted hometown. Well known for his portraiture of musicians and sports figures, Hurst has created a print of Willie Nelson in honor of his seventieth birthday. Hurst’s association with the Texas musical living legend goes back to his early days in Austin when he would volunteer for Farm Aid. 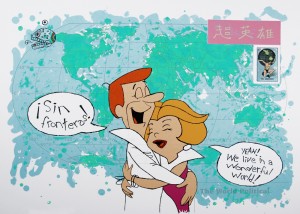 The Jetsons. A family of the future living in the year 2062 in a futuristic utopia of elaborate robotic contraptions, aliens, holograms, and whimsical inventions. Wait! That sounds like SXSW Interactive! The word “innovation” was reported to have been used 650,o00 times so far. (Okay, okay, according to The Onion, anyway.)

“Los Supersonicos” as they are called in Spanish, represent a future in which humans will get along with one another regardless of language or cultural identity. Indeed, just as all cartoons are dubbed to fit the language in the country they are aired in, George Jetson speaks to the audience in Spanish while he his wife marvels at the perfection of their world in English. Hey, that does kind of sound like SXSW, with people from all over the world gathering to see the same bands and films… 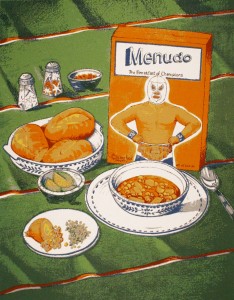 SXSW is all about film, music, and interactive media…and drinking. And because it’s so much fun, and sometimes too much fun, it means you might wake up the next day feeling a little hungover. Or “crudo” as they say in Spanish. You could opt for the ever-Austin breakfast taco (bacon and egg? migas?). But if you want to do it right, you’ll have a bowl of menudo. It’s supposed to be the miraculous cure for any hangover!

For those of you who have never been initiated, Menudo is a traditional Mexican soup made with beef stomach in a clear broth or with a red chili base. Usually, lime, chopped onions, and chopped cilantro are added, as well as crushed oregano and crushed red chili peppers. It’s the breakfast of champions.