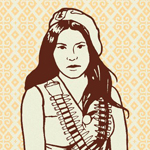 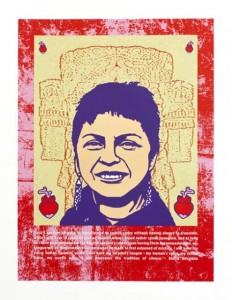 The piece honors her legacy by juxtaposing her portrait with Coatlicue the Mexica representation of mother earth. In Borderlands, Anzaldúa writes about the Coatilcue State as a type of “internal whirlwind” which “gives and takes away life”, “invoking art,” and that it is “alive, infused with spirit” (Anzaldúa 68, 88-89). Cervantes cites the following quote by the author:

Until I am free to write bilingually and to switch codes without having always to translate, while I still have to speak English or Spanish when I would rather speak Spanglish, and as long as I have to accommodate the English speakers rather than having them accommodate me, my tongue will be illegitimate. I will no longer be made to feel ashamed of existing. I will have my voice: Indian, Spanish, white. I will have my serpent’s tongue – my woman’s voice, my sexual voice, my poet’s voice. I will overcome the tradition of silence.

Cervantes believes that art can be an empowering reflection of community struggles, dreams and visions.  Following principles of Xicanisma and Zapatismo, she creates work that translates people’s stories into art that can be put back into the hands of the communities who inspire it. 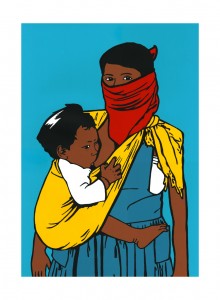 “I recognize that the history of the majority of people worldwide is a history of colonialism, genocide, and exploitation,” explains Cervantes. My art is grounded in Third World and indigenous movements that build people’s power to transform the conditions of fragmentation, displacement and loss of culture that result from this history.  Representing these movements through visual art means connecting struggles through our work and seeking to inspire solidarity among communities of struggle worldwide.  ”

In response to the question of whether she has been self-taught, Cervantes says only partially. She attributes her education to mentorships by several artists in her worldview and practice, such as Celia Herrera Rodriguez, a painter and installation/performance artist who helped her learn how to integrate her worldview into my work, and Jesus Barraza, her partner and collaborator who helped expand her knowledge of printmaking and digital design.

Click here to purchase her Serie XIX print, Tumbling Down the Steps of the Temple. You can read more about Melanie Cervantes on Dignidad Rebelde’s website, a collaborative project that believes art can be an empowering reflection of community struggles, dreams and visions.