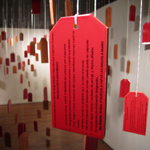 Opening on October 19, 2012 at The University of Texas at Austin College of Fine Arts Visual, A Nation of Fear is a group exhibition confronting issues surrounding the current climate of violence in Mexico, with work by Miguel A. Aragon, Adriana Corral, and Raymundo Delgadillo.

Each artist addresses the current wave of violence in Mexico, as well as its causes and the widespread social and political consequences both in Mexico and the U.S. More than 50,000 people have died as a direct result of the Mexican drug war over the last few years, and thousands more have been affected by the violence in the border town Juarez. The exhibition continues through November 10, 2012.

For the Serie XIX Artist in Residence program, Corral produced the serigraph Bones (below) – click here to purchase one of these limited edition prints (total of 50). 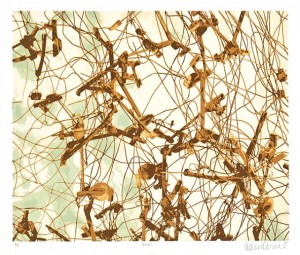