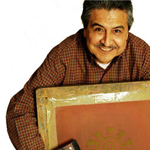 Founded in 1993 by Austin artist Sam Coronado, the Serie Project is a nonprofit organization that offers free printmaking facilities, training and housing for 8 to 15 artists per year through a one-week Artist In Residence program. During the residency, each artist produces an edition of 50 prints in a collaborative workshop setting with a Master Printer.

Coronado established the Serie Project in East Austin (the Montopolis neighborhood) nearly two decades ago, long before it became popular to live on the east side. He envisioned a supportive environment where artists could learn the serigraphy technique through a one-on-one apprenticeship, and where affordable printmaking services and fine art prints could be made available to the community.

Serigraphy – also known as screen printing – is an especially important form of art because it’s the most versatile of all printing processes, and basic materials are affordable and accessible. As a result, it has frequently been used in political revolutions and social activism. Many artists who have produced their work at the Serie Project have incorporated messages for positive social change.

In Austin, Flatbed Press is the only other studio producing fine art serigraphy, and there are only about a dozen Latino owned screen printing studios, part of a consortium called the Consejo Grafico, in the entire United States.

Although serigraphy is becoming a rare art form, because of Coronado’s vision and dedication, the Serie Project has fostered over 250 artists to produce a collection of serigraphs, launching many of them – along with aspiring curators, art administrators, professors, and others – into successful creative careers.

Coronado has proved his commitment to the Austin community as a teacher, artist, activist, director, and a friend. But funding and support for the arts has become less and less accessible each year, as the country still struggles to recover from the recession and unemployment hovers at high rates.
For more information supporting the Serie Project or taking part in the November 17 fundraiser, Roots for a New Beginning, please contact serie@serieproject.org or 512-385-3591.

About Serie Project
The Serie Project is a 501(c)(3) nonprofit dedicated to the fine art of serigraphy – a technique that produces original, hand-pulled prints – as well as promoting and exhibiting the work of Latino and other underrepresented artists, and making prints affordable to the community.