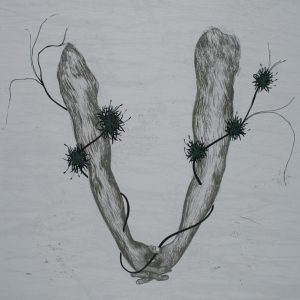 Teresa Gomez Martorell uses intaglio printmaking as her primary medium, working with repetition, multiplication, and superposition. She came to the Serie Project in order to experiment with a new medium: screenprinting. Her print Stitch for Arms is based on language and the everyday. As a recent immigrant from Barcelona, she struggled with the English language and began to think of words as anthropomorphic objects that can bend and move, allowing us to express ourselves. Her print has a grey background with two arms interlaced in the foreground that unite two separate beings. With a calligraphic quality, she wrapped a vine with ball moss (Tillandsia recurvata) around the arms, a natural element common to this area and frequently found on live oak trees. Gomez Martorell marvels at their innate beauty, finding the extraordinary in the ordinary. She adds, “You don’t have to climb a mountain to see something extraordinary, you can study the things around you, just look at them through other eyes.” The artist uses nature and animals as the main topics of her artistic exploration. She credits Native American culture and European legends of mythical beasts as a source for her fantastic images.

A native of Barcelona, Spain, Gomez Martorell earned a BFA from the University of Barcelona and an MFA in Printmaking from Southern Methodist University. She has also received training from Atelier 17 Contrepoint in Paris. Her work has been featured in various solo and group exhibitions in the U.S., Spain, Argentina, Denmark, and Belgium.