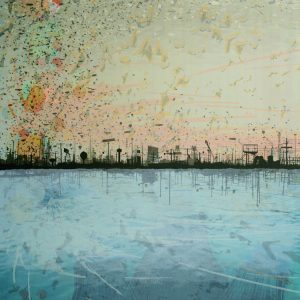 Traditional fine art requires the subjective interpretations of individual artists. As such, each piece of work is a reflection of one person conveying a message to many. But in the 21st century, traditional fine art has gotten a facelift with the collaborative efforts of Austin’s Sodalitas. Sodalitas comprises three artists producing art as one who hope to discover the dynamics of group cohesion, the role of individuals within groups, and the point (and reasons) for a group to begin working against itself. The trio joined forces in 2002 to address their intrigue in “group art” using their respective mediums ranging from paints and sketches to scans and eclectic maps of the Austin area. Their mission is to explore new ways of working together, driven by the idea that artwork created by three is accessible to more audiences that artwork made by one. Their pieces are often colorful, playful and inspired by urban sprawl, war, advertising, and science. For Serie XIII, Sodalitas created Coastown, TX, a unique view of the Austin skyline from across Town Lake. Coastown, TX is the Serie Project’s most ambitious work to-date because it not only incorporated 30 colors of paint, but also required a calculated effort by the artists to communicate their vision to Serie’s master printer, Paul Fucik. Layer-by-layer, and color-by-color, the cityscape unfolds as viewers are drawn to the shores of this polluted horizon. References to Austin’s bats and water tower can be seen alongside the faint abstractions of three figures emerging from the print. For a step-by-step process of the making of Coastown, TX, visit http://www.sodalitasart.com.