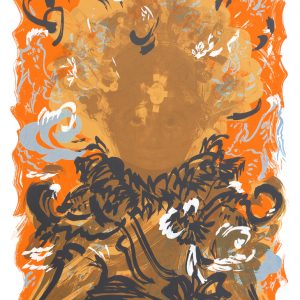 Stating that her work “inhabits a baroque universe of different worlds of aesthetic planes,” Scherezade Garcia created an image of a mestizo figure, half Catholic virgin and half conqueror, for her Serie Project print. The image is decorated with symbols of water as a way to evoke the liquid frontiers between the two worlds. Symbols of innocence shaped as Disney characters such as Bambi and Mickey contemporize the image.

Born in the Dominican Republic and now residing in Brooklyn, NY, Scherezade Garcia’s mixed media artwork is specifically inspired by the Magic Realism movement in Latin American literature. She received her BFA from Parsons School of Design and her MFA from the City College of New York. Her work has been exhibited across the US, Latin America, and Europe.