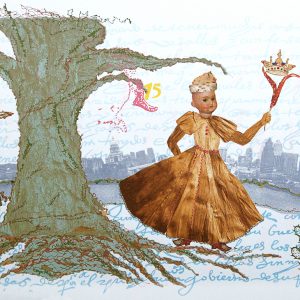 Sandra C. Fernandez plays many roles: woman, artist, mother, daughter, educator, Latina, Austinite. As an artist, she says, “My art talks about my own experiences…Art, to me, has to be expression. You need to feel it, you need to have it in your system.” Like Fernandez’s life, many layers of ink—each possessing a unique symbolism—unite to form the print Coming of Age (Transformations).

Fernandez’s print celebrates Serie XV through the use of images that convey both the triumphs and struggles of the Serie Project and the Latino community. For the Project’s fifteenth anniversary, Fernandez situates la quinceañera in front of Austin’s skyline, birthplace of the Project. Partially legible Spanish script filling the background alludes to a rich cultural heritage. La quinceañera dons traditional garb—elaborate dress, shoes, crown—but her face is that of a baby to suggest how much growth the Project will undergo in the future, growing larger exponentially as others realize the great historical impact of the Project’s archive of Latino/a artists. The cornhusk dress was sewn by Fernandez, then photographed and digitally transferred onto a screen to create the printed dress. Growing up, Fernandez was taught such skills as sewing and knitting, crafts associated with femininity. She frequently uses these techniques in her artwork, and believes that sewing and serigraph printing should be recognized as the fine arts that they are.

La quinceañera triumphantly carries a torch of jalapeños topped with a crown as homage to her heritage and to Coronado Studio, whose chop, or embossed symbol authenticating each print, is a crown. Various other symbols embellish the scene: a bat, a cactus, the number “15.” According to Fernandez, the tree is a symbol of strength and wisdom. Written on the trunk are issues concerning Latinos in America; each word or phrase is written in both English and Spanish. Hanging from the tree is a pink milagro, or metal religious charm, there to bring luck to la quinceañera.

Sandra Fernandez was born in Queens, New York, but reared in Quito, Ecuador. She completed her B.S., M.A., and M.F.A. at the University of Wisconsin-Madison. Fernandez participated in Serie XII, creating the print titled Enjaulada. She currently lives with her son and daughter in Austin where she is an Assistant Professor at the University of Texas.