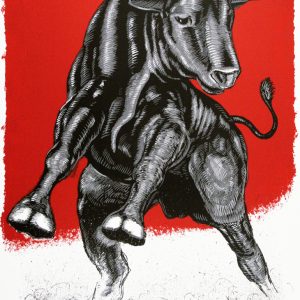 The bull in Sam Coronado’s print, Quince, is a symbol of strength as well as the suffering and struggle of survival. The bull’s muscles and aggressive stance show his power, as the red background conveys passion and reminds the viewer of a matador’s cape. Coronado is reminded of the strength of the artist’s involved in the Serie Project and the power of the message that the Project can send to the art world. The struggle of a bull in the bullring is also parallel to the struggle of an artist to become successful. Facing the matador, the bull has little chance of survival. He suffers through the pain of the fight only to be killed as a triumph of the matador. Like the bull, artists struggle through hard times and many never know success.

Quince doesn’t have a specific setting. Coronado intended to leave the bull floating in time in a general setting that “could be heavenly or almost hellish” as the dust the bull kicks up recalls the tops of clouds in front of the fiery background. Coronado used a photograph to create the original, which is acrylic on a large canvas. Coronado kept the feeling of the large canvas by experimenting with a new table to produce the larger than average print. Quince was commissioned by the Mexican American Cultural Center and hung as part of a retrospect exhibited in 2008.

Sam Coronado was born in Ennis, Texas and was raised between there and Dallas. He eventually studied in Austin and received a Bachelors of Fine Arts from the University of Texas. His work has been widely exhibited throughout the United States, Mexico, Europe, and Africa. He is currently a professor of drawing, painting, and color theory in the Visual Communications department at Austin Community College.