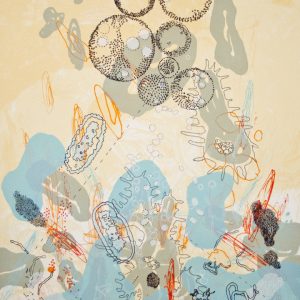 Born in Rio de Janeiro, Houston artist Rosane Volchan O’Conor studied music at the Conservatoire Royal de Musique in Brussels and art at the Auderghem Academy. She is influenced by music and biology in which she “visualizes the idea of rhythm and the idea of polyphony – where each melodic line has an autonomous function but also synthesizes perfectly within the whole.”

Her compositions are comprised of lines layered upon themselves to create a sonorous visual layer. She is simultaneously influenced by the microscopic such as protozoa and nerves, as well as the macroscopic (land formations and galaxies).

Volchan O’Conor has exhibited in galleries and art spaces throughout the southwest, New York, and her home country Brazil.