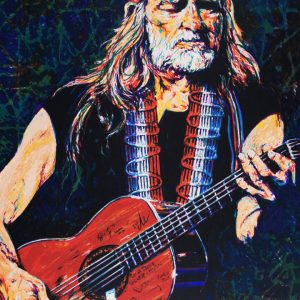 Robert Hurst born in Houston, Texas, now claims Austin as his adopted hometown. Well known for his portraiture of musicians and sports figures, Hurst has created a print of Willie Nelson in honor of his seventieth birthday. Hurst’s association with the Texas musical living legend goes back to his early days in Austin when he would volunteer for Farm Aid. Art education began for Hurst while studying medical illustration at both Stephen F. Austin University and North Harris County College in Texas. In 1983 he studied painting at the Art Institute in Houston.