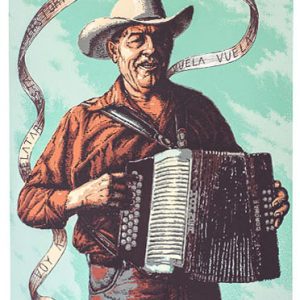 Click on image to see full detail of print.

Rigoberto A. Gonzalez’ current work consists of representational tableaus that revisit the narrative paradigm. The salient naturalism of the tableaus is derivative and informed by the consciously formulaic artifice of Spanish, Neopolitan, Caravagist figuration. It is an attempt to appropriate the visual vernacular of a European culture and to draw a historical allusion. A theme running through the paintings is the brutality associated with drug cartels in the border region between Mexico and the United states.

In his paintings, Gonzalez appropriates and connects the depiction of violence by Caravaggist, Neapolitan painters with the portrayal of violence in corridos. A corrido is a Mexican folk ballad in the past, where singers would document events in their communities or the lives of heroes from the Mexican revolution. More recently, corridos have focused on the lives of drug smugglers. Essentially a corrido tells a story – it is a narrative. There is usually a violent theme to a corrido; however, Gonzalez is not interested in a journalistic version of violence. Corridos – similar to Caravaggist paintings – are not prose, but verse.

Check out our Artist in Residence blog series featuring Gonzalez.

Read a recent article about Rigoberto A. Gonzalez in Latino Magazine.

Watch the video interview with Rigoberto A. Gonzalez on YouTube: