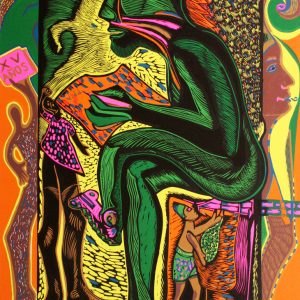 The subject of Rene Arceo’s print El Poeta is a fantastic figure; he is a creator deep in thought and surrounded by his muses and characters he can bring to life with the power of his words. Like a plant, the poet is a vivid green and through him there is potential for growth, hope and new life. He seems strongly rooted to the ground by his feet, which in fact are not feet, but growing into other figures, a car and another human being. He holds a notebook to imprint his ideas and begin the process of creation as his future characters clamor for attention around him, one waving a sign with the quinceañera for him to see. As an artist, Arceo feels a kinship with the poet, who also has the power to create worlds.

Arceo has worked in art education at Chicago public schools for eight years, and his student’s influence can be seen in the bright, striking colors he uses in his work. His preference for bold colors was reaffirmed as he saw how young children use color innately, without fear of bright hues. Originally from Michoacán, Mexico, Arceo first visited Chicago in 1979 and eventually settled there and began studying at the School of Art Institute Chicago. Arceo has explored other printmaking techniques such as lithographs, woodcuts, and intaglio, but has worked with linoleum-cut prints for fifteen years.