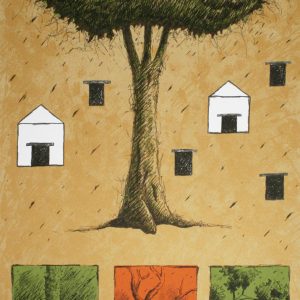 Chiapas, México native, Ramiro Jiménez Chacón’s art primarily consists of elements found in nature and in the homes of the indigenous communities of México. In his print Hábitat de Soledad, or “Habitat of Solitute” in English, Jiménez’s tree, house, and door images represent “keys” that lead viewers into unknown places, perhaps maybe even into a state of introspection. The tree featured in the work is the Ceiba, which is known as the “Tree of Life” in the Mayan culture. Jiménez uses color carefully to demonstrate the manner in which this state of solitude is always present even though the outside world is constantly evolving. The weathered gold color represents the effect that time has had on this place while the orange is representative of the obstacles humans must overcome on a daily basis.

Jiménez received a Bachelor of Fine Arts from the Universidad Veracruzana in Xalapa, Veracruz, México. Currently, he serves as coordinator for the Visual Arts Program at the Universidad de Ciencas y Artes de Chiapas in the capital, Tuxtla-Gutiérrez. Jiménez’s work has been showcased in Mexico, Latin America, the United States, Europe, Canada and Japan.