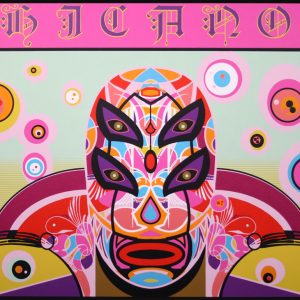 The “Luchador” in Quintin Gonzalez’s print Chicano 15 is an image that invokes nostalgia and joyful memories of youth for Chicano viewers. The Luchador is a fighter who performs in the Lucha Libre, or free fights, popular in Mexico. Gonzalez sees the Luchador as a hybrid of an actual individual and a fantastic heroic image, as they have the dual role of masked acrobatic grapplers in the wrestling ring and also superheroes fighting monsters, aliens, and other strange nemesis in modestly budgeted films and comic books. The Luchador, with his bizarre adventures and wonderful absurdity, serves as an escape from everyday banalities and hardships of life and becomes a modern myth in Chicano culture.

Gonzalez expresses rebellion, which he considers to be a core value within the Chicano experience, through the enigmatic title of his painting. He resists the viewers expectation that the title will explain the image. The font, familiar in tattoos and various urban images, is also a reminder of the resistance common in Chicano culture. Gonzalez pieces together visual elements of the marginalized Chicano culture and elevates them with modern formal manipulation and design.