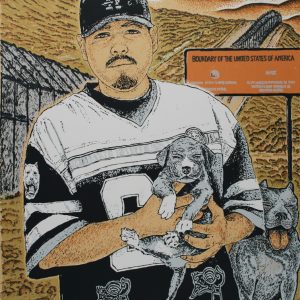 Much of Oscar Moya’s current work deals with border issues and working-class aesthetics, not just because of his proximity to the U.S.–Mexico border but also due to his own experience as an immigrant and a migrant worker. El Cholo is a portrait and narrative print that tells the story of his friend Arturo, nicknamed Cholo. The young man depicted in the portrait lives only two blocks away from the border of El Paso and Ciudad Juarez, and he breeds pitbulls as a hobby. Moya and his friend met while working at a maquiladora (American-owned assembly plants located on either side of the border). His print provides social commentary on this aspect of the border economy, as American companies set up manufacturing plants on Mexican soil to exploit cheap labor, then they transport the products over the border and finish their assembly in El Paso, where products are labeled Made in the USA. In the print’s foreground, El Cholo stands proud with one of his first puppies, while the pitbull bitch stand to his left. The sports jersey and cap reflect the cholo look characteristic of border towns. On his jersey, Moya added two Aztec symbols: the number 16 in honor of Serie Project’s 16th year anniversary and the Aztec symbol for dog in honor of his friend. An arid desert with sand dunes forms the background with the border fence creating a diagonal that leads to the horizon line.

Oscar Moya was born in Mexico City and immigrated to the United States in 1971 with his family at the age of 15. He labored as a migrant worker from San Antonio to Illinois where he attended the School of the Art Institute of Chicago and resided until 2005. As an accomplished artist now living in El Paso, Moya has participated in group exhibitions in the United States and Mexico. Among his credits, his work has been shown in the National Museum of Mexican Art in Chicago, La Llorona Art Gallery, Casa de la Cultura Carlos Cortez Mestizarte, Casa de Cultura Juchitán in Oaxaca, Mexico, El Museo Contemporaneo de Tijuana in Baja California and various El Paso locations. Moya also served as an arts activist in several arts organizations such as MARCH (Movimiento Artistico Chicano), Casa AZTLAN, MIRA, Inc., El Taller Community Gallery and Casa de la Cultura Calles y Sueños in Chicago.