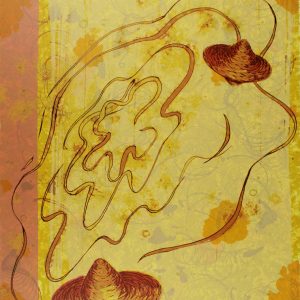 Spin shows us two tops “gyrating over a sea of ribbon forms. Underneath this is a ground of spirals and texture. The piece uses very warm tones especially red and a golden yellow.” Schlinke began her career as a dancer in the 1970s, and she soon became influenced by the thought of Merce Cunningham, John Cage, and Robert Rauschenberg, and started creating two-dimensional art on her own, exercising her fascination with stillness and movement. She sees her own work “primarily as a place where the mind can wander about and replenish itself as a way to focus on t