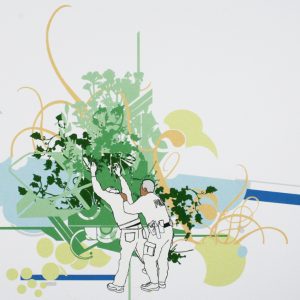 Growing up at the border of Texas and Mexico has made Miguel Aragon one of Texas’ leading young printers. His work is concentrated on border life following the 1997 death of a prominent drug lord in which competing groups warred for supremacy in the area. Hundreds of innocents died because of this drug war, leaving many in the area apathetic to the wrongdoings that occurred, which prompted Aragon to create pleasant images through combinations of subtle colors and shapes. This method of printing helps portray what Aragon feels is the negligent attitude of people in the area. For Serie XIII, Aragon took his theme of violence and created Pastos Verdes y Cielos!! Azules (“Green Pastures and Blue Skies”). The image demonstrates a common element of criminal life: the false sense of stability criminals imagine is explained with the words “green pastures,” while real life is cursed with the arrival of a policeman dressed in blue. Aragon puts a twist on the title by adding exclamation marks to the word cielos-a common mistranslation of English expletives in movie subtitles for Spanish speakers.

Aragon received a double Bachelors of Fine Art in printmaking and graphic design from the University of Texas at El Paso in 2002 and is a faculty member at the Universidad Autónoma de Ciudad Juarez. At present he is experimenting with digital images with mainly vector-based paints.