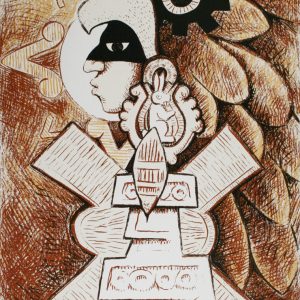 Mexico City artist Mario Rendon Lozano began sculpting in the late 1950s. He has created large public works of his hybridization of contemporary and pre-Columbian Mexican symbols and forms in Argentina, Bulgaria, and Cuba as well as in the United States and around Mexico. His 20-foot Boxer Monument, commissioned by the World Boxing Council, resides in the Paseo de la Reforma y Jaime Nuna in Mexico City. His 30-foot ode to Carlos Monzon, also for the World Boxing Council, is located in Santa Fe, Argentina. Rendon is also an educator, serving as director of the painting, sculpture and etching school at La Esmeralda at Mexico’s National Institute of Fine Arts.