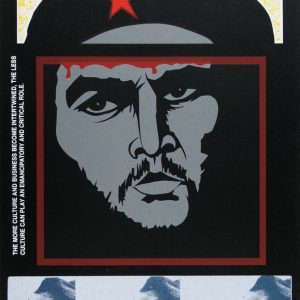 California artist Malaquias Montoya was raised in a family of seven children by farm-working parents who could neither read nor write Spanish or English. The three eldest children never went beyond the 7th grade as they had to work in the fields for the family’s survival. After his parents divorced in 1952, Montoya’s mother continued to work in fields so that the four children remaining at home could pursue their education. As an artist, Montoya feels it is his purpose to express to each individual the importance of developing that innate quality characteristic in all of us, that of creativity. His goal is to show the relationship between that creativity and community action, as both an educational tool and a catalyst for social change.

The print de Vallegrande a Hollywood features a caricature of Che Guevara, Argentine Marxist revolutionary, politician, author, physician, military theorist, and guerrilla leader. Below this image are three-reproduced photographs of Che’s dead body in 1967. After secret burial, Che’s remains were rediscovered in 1997 in the small town of Vallegrande in Bolivia.