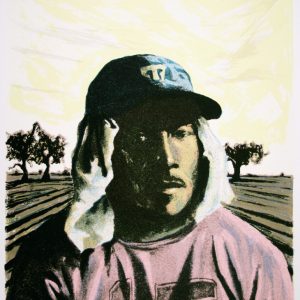 Maceo Montoya creates narratives through his artwork; his figures tell the stories of a forgotten population, of undocumented immigrants who seek opportunity in a new land. Campesino y También Fan de los Pumas is influenced by both the field workers near Montoya’s hometown in Northern California and the landscape of that region.

Is el campesino walking onto the field under the fresh warmth of the morning sun, prepared for a hard day’s work? Is he exhausted and retiring from the dusk-lit field to rest at home? The sky’s ambiguous glow leaves the decision to the viewer. Like the lighting of the sky, the chiaroscuro of the flat landscape also lends itself to multiple interpretations. The trees appear to be dancing figures, praying with their branches – their arms – outstretched to the sky. All of these elements unite to create a mood in which to set the main element of the composition: el campesino.

The overlooked campesinos, lost in the shadows of their wide-brim hats and handkerchiefs, exert their own influence upon the landscape. However, the subject of Montoya’s work emerges from the shadows to reveal a distinct individual with a life apart from his existence as just a field worker. His Pumas cap from UNAM, the National Autonomous University of Mexico in Mexico City, expresses his interest in college soccer. His penetrating gaze assures that he is not just another element of the landscape, but a human being with the requisite emotions who, this time, will be remembered. Montoya is respectful and honest in rendering portraits. Similar to the way a listener will devote the time to hear a complete story, Montoya hopes viewers will stop to look at his artwork long enough to walk away with meaning, even if that meaning isn’t necessarily what he intended.

Maceo Montoya is a painter, printmaker, muralist, and novelist. He hails from a family of creative individuals like cousins Tomas and Richard and late brother Andres, Malaquias, Maceo’s father and renowned printmaker, and his brother José instilled in their children a Chicano philosophy of resistance that has influenced their works. Born in Oakland, CA, he was reared in nearby Elmira and currently lives in Woodland, CA. He received his B.A. in History from Yale University in 2002 before completing his M.F.A. in 2006 at Columbia University.