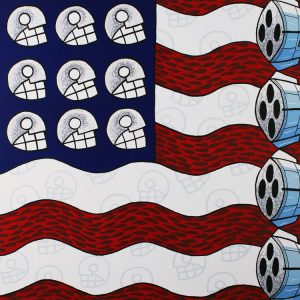 If a global society pertains to all people living today, then Luis Valderas epitomizes the notion through his visual art. A first-generation Mexican-American born in 1966, Valderas uses various mediums to communicate his mantra of working “with the message, not the medium.” Paper mache influences his ceramic work, which influences his mixed-media pieces, which ultimately influence his paper mache pieces-continuing the creative cycle Valderas thrives off. Raised in the Rio Grande Valley, Valderas attended the Art Institute of Dallas in 1990. Luis then trekked south to receive his BFA from The University of Texas Pan-American at Edinburg, Texas in 1995. Shortly thereafter, Valderas’ exhibition career rocketed away, taking him as close as museums in his hometown of McAllen, Texas and as far away as SOHO galleries in New York City. An advocate of Rio Grande Valley culture, Valderas uses his experience as a national artist to promote awareness of the visual arts by conducting workshops with local schools. Despite his national success, however, Valderas has matured into an artists who understands he pertains to an international world. Whether commenting on Aztec, Greek, or Hindu motifs pertaining to foreign policy, or just trying to capture the timelessness of certain cultures, Valderas truly knows what it means to live in a global society: “As I explore and link mythological icons, I recreate their essence, giving form to the fears, dreams, and desires that they represent. In short, my work is a celebration of life that also questions and criticizes our universal indifference to the co-existence of so many things.”