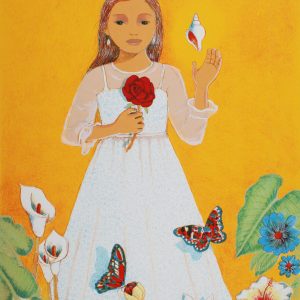 Liliana Wilson frequently imbues her drawings and acrylic paintings with magical elements. “The things that we can do are many…we have powers that we don’t know that we have,” says the artist of her beliefs about the supernatural. As a quinceañera celebrates the development of a girl, so too it celebrates the powers she will possess as a woman. Wilson’s print is titled Quinceañera, and the magic within is conveyed to the viewer through innocence and mystery.

La quinceañera wears a tiara and white gown of delicate chiffon whose subtle blue pattern and opalescent translucence make the girl appear younger and even more innocent than 15. Wilson continually strives for soft, delicate tones, as she would rather transmit peace with her art than contribute to the negativity of the world. The flowers encircling la quinceañera enhance her beauty and serve as a reminder that, just as the flowers bloom, the changes she will undergo are a natural part of developing fertility. Butterflies also allude to this development just as the primped adolescent is a debutante at her quinceañera. One hand clasps a red rose, the symbol of love, while above her other hand floats a shell, a symbol of transformation to Wilson. Her ability to levitate the shell demonstrates her mystical capabilities as woman.

Liliana Wilson was born in Valparaíso, Chile, and received a degree in Law from Catholic University of Valparaíso. She also studied drawing at the Instituto de Bellas Artes at Viña del Mar. She moved to the U.S. in 1977 and has since studied drawing at Austin Community College and painting at Southwest Texas State University. Wilson created Mi Niña Triste II in Serie I and Eva in Serie XI.