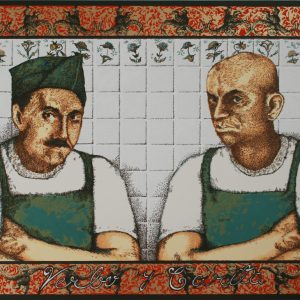 Jose Rodriguez based his humorous print Verbo y Carita on the same peculiar Mexican phrase: those with the gift of gab (verbiage) are said to display verbo and those who are good looking display carita. The idea parallels the story of Cyrano de Bergerac. The double portrait came about after the artist visited Morelia, Mexico with a friend and took a taxi one night. The amusing cab driver was talking about Verbo y Carita and claimed he was fortunate to have both: he enjoyed talking and his cab was full of interesting trinkets, including a monkey, which appears on the print’s border as a decorative motif. Rodriguez later wondered whether he and his friend had either of those qualities and developed this image as a way of telling the story. The portrait includes two working-class men with aprons, standing side by side with arms crossed. The intensity of their gaze signals the importance of their work. Rodriguez used cross-hatching to develop the figures and a tile background with flower designs on the top. The intricate border, based on Indian miniature paintings, provides a shifting of space where the figures are confined. The artist uses this visual element as a metaphor for the exploration of placement that is the idea of fitting in to a particular situation. His simple palette of complementary reds and greens is enriched by metallic gold ink that gives the print a luminescent quality.

Rodriguez was born in the city of Maracaibo, Venezuela. His father was a petroleum engineer with Shell Oil and his mother was from Michigan. Due to his father’s line of work, the family lived in Indonesia, and traveled through Hong Kong, Bombay, Rome and the Netherlands. Soon after the family settled in New York, where Rodriguez recalls spending weekends at the Lincoln Center, the Museum of Natural History and the Metropolitan Museum of Art. They returned to Venezuela and stayed there until Rodriguez graduated from high school. Hailing from a family of engineers (his father and four of his brothers are engineers), he felt pressured to find his gift at math when his talents lay in working with images. He began studying architecture at the University of Oklahoma, then switched to design, and finally arrived at art; earning his bachelor’s in fine arts. He went on to receive an MFA in Printmaking from Indiana University at Bloomington. He has exhibited nationally and internationally, and his work forms part of several prestigious public and private collections. He currently lives and works in Leander, Texas.