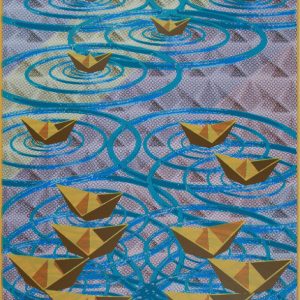 Life and Death by José Andreu is a meditation on memory, language, interconnectedness, and the fragility of life. In the print, sixteen paper boats float on intersecting ripples over a half-tone geometric background. The boats celebrate the 16 years of the Serie Project, but they also hold a special meaning for the artist, a way of connecting with memories of his youth, by recalling the experience of making paper boats with his mother in Puerto Rico. The boats or vessels in the foreground represent life and the ripples suggest how we are all interconnected, akin to the old story of a butterfly flapping its wings in China and causing a ripple elsewhere in the world. Andreu uses scale and a series of diagonals to create the illusion of perspective. The background is a series of interconnected boats representing the departed, whose spirit is always present.

José Andreu was born in Mexico City, of Puerto Rican parents. Raised in Puerto Rico, Spain, France and the United States, his mother was a teacher and his father a journalist and founder of the Pro-Independence Movement in Puerto Rico. Orphaned as a young teenager, Andreu financed his education by drawing portraits at amusement parks and working as a graphic designer. He studied painting and printmaking, earning a BFA at Virginia Commonwealth University and an MFA at the University of Wisconsin, Madison. He has exhibited in the United States, Mexico, Cuba, and Europe, and is an adjunct professor at the School of the Art Institute of Chicago and Columbia College.