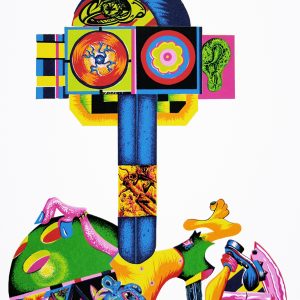 A native of San Antonio presently residing in Dallas, artist John Hernandez received a Bachelor of Arts from Our Lady of the Lake University in San Antonio. Later, he earned his Master of Fine Arts from North Texas State University in Denton, Texas. In 1989, he received an artist’s grant from the National Endowment for the Arts. His work has been widely exhibited. His style is humorous and personal. His bold and aggressive characters mimic such sources as horror movies, cartoons, comic books, and album covers. Anthroatlas is a re-created image originally produced in the form of a nine foot mobile.