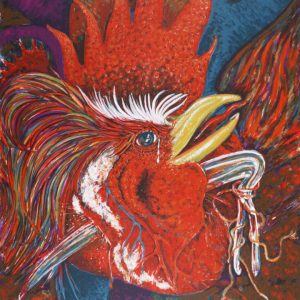 Proudly proclaiming himself ethnically as a Chicano, Joe Lopez’s watercolors are a metaphor for the history and traditions of the two countries he identifies with-Mexico and the United States. Spending his early life in a barrio near the posh neighborhood of Alamo Heights, San Antonio, Lopez considers El Barrio Escondido (The Hidden Barrio) as the cultural backdrop for all his works. A leader of the Chicano art movement, Lopez has gained national acclaim as an artist who paints real life inspired by the triumphs and tragedies of a barrio childhood. Perhaps one of his greatest achievements is the manner in which he has gained such acclaim: born with one hand, Lopez learned the skills of an artist with virtually no resources thanks to his wood-carving uncle and renown watercolor painter Warren Hunter. Being self-taught also helped Lopez dive into the word of management through his Gallista Gallery in San Antonio, which promotes new and unknown artists. Perhaps his greatest feat is despite all his adversity, Lopez fought and won a legal battle against the Ernest and Julio Gallo winery over the use of the word gallo (rooster) in his business-a true victory for a man who was willing to “stand and fight,” as Lopez says. “We didn’t tuck our tail and run, a true gallo doesn’t do that. Estos gallos no corren!”