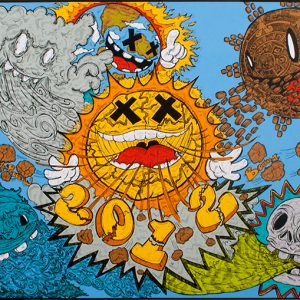 James Huizar received his BFA in Studio Art from the University of Texas at Austin where he studied drawing, printmaking, and painting. He has worked at Landfall Press in Santa Fe, NM and is currently Mexic-Arte Museum’s Production Manager. He has exhibited throughout Texas and curated Young Latino Artists 17: Grafficanos at the Mexic-Arte Museum in Summer 2012.

As part of the Serie XVIII theme, Huizar resurrected an image from a painting he had started in college. Four of the six elements and inanimate objects with eyes and expressions are spewing into the sun (the Aztec sun stone, wind, water, and death). The other two, Earth and the sun, are on fire and exploding. There is an overall sense of happiness and joy but with an underlying theme of doom – the end of the world as we know it.

A self-described “Hick-spanic,” Huizar was born in Pleasanton, Texas, the birthplace of the cowboy. He is influenced by pop art and graffiti art. He believes that art should make the viewer savor the good moments and appreciate the time spent making the art, allowing them to respond to the content and reflect on their own past experiences.