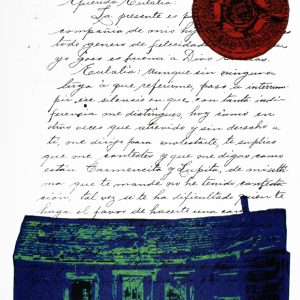 Chicano (chee-kan-o, sh-) n., pl. Chicanos: A Mexican-American. Usage Note: used only of Mexican-Americans, not of Mexicans living in Mexico. Literary and political movements of the 1960s and 1970s among Mexican-Americans established Chicano as a term of ethnic pride. Since usage and acceptance of this word can vary from one region to another, an outsider who is unfamiliar with his or her audience may do well to use Mexican-American instead. -The American Heritage Dictionary of the English Language, IV Edition But in George Rivera’s case, exception seems warranted. The power of words is an ever-present theme throughout George Rivera’s life and artwork, thereby making him a proud promoter of Chicano art and culture. A native Texan, Rivera is-among many other things-an artist, a sociologist, a professor, a poet, and a quintessential spokesman for Chicanos everywhere. Predominately producing digital images, Rivera presently works almost exclusively with language-based art. Intrigued by words, Rivera began writing poetry while he attended the University of Houston where he received his BA in psychology. Following a master’s degree in sociology, Rivera received a Ph.D. in the same discipline from the State University of New York in 1972. Combined with a need to better understand the complexities of “race relations” in American society, Rivera established his artistic toolkit through words. As a framework for his visual art, words and sociology help Rivera grasp the scope of social problems he hopes to expose to all people-Chicanos and non-Chicanos alike. After obtaining a faculty position at the University of Colorado at Boulder in 1971, Rivera took it upon himself to address key issues affecting people: AIDS, the Chicano movement, racial inequalities, death, and historical identity are all paramount themes throughout his work “If Chicano culture is to survive in the United States,” Rivera writes, “we must remember the ways of our ancestors-the stories of our families and the collective legacy of our culture. It is often said that we are mestizos, but we are more than that. We are exponential mestizos-Chicanos raised to the power of our generation. As each generation takes us further away from who we were, we must hold steadfast to who we are.”