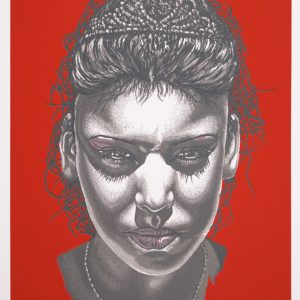 Gaspar Enriquez witnessed many young girls mature too quickly during his 33 years as a high school art teacher. One of these students is the subject of his print La Smiley: 15 Going on 30. The girl’s name is Priscilla and she was 15 when Enriquez first painted her. As implied in this portrait, she did not smile, which is why she acquired the nicknamed “Smiley.”

A lifetime spent mostly in el barrio, or an economically deprived neighborhood, has given Enriquez uncommon insight into those he chooses to represent in portraits. From pachucos to cholos, his work immortalizes “a lifestyle of attitudes…defined by mannerism” that is part of his daily life in a two-culture environment. His artwork serves as a record of his experiences, ideas, and feelings about the suppression of Chicano culture. He prefers red as the background because it appropriately conveys “the passion and the fury” of those who hail from el barrio. Even Priscilla is simultaneously a pretty little quinceañera, primped and donning a tiara, and a world-weary woman with a penetrating glare. Living in a world that is marginalized and riddled with poverty and crime, little girls in el barrio have fleeting childhoods.

Gaspar Enriquez employs airbrush as his primary artistic medium, but is also well-versed in metalwork. He has a fine arts degree from the University of Texas at El Paso and received his M.F.A. in metals from New Mexico State University. He was born in El Paso and now works full-time as an artist. This is his second print with the Serie Project; in Serie V he produced Q-Vo-Way, which is a portrait of a cholo.