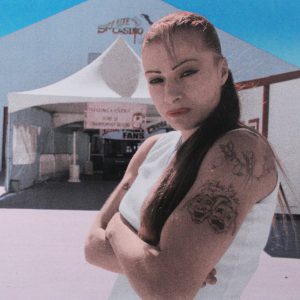 The title of Delilah Montoya’s print, Smile Now, Cry Later, comes from an old barrio saying that refers to a person’s feelings while they’re doing something they shouldn’t. Initially, one will enjoy the feeling and smile, but eventually the consequences will cause one to “cry later.” The female boxer in the image has this tattooed on her arm, which Montoya chooses to make the focus of the print. The image was taken from a photograph Montoya took as part of a series on female boxers, a subject she feels that deserves recognition as an emerging sport. Montoya doesn’t believe in an “innate female nature” but rather, that although a softer nature is encouraged in women, they don’t have to be that way. She plays with this idea with the “quinceañera” sign in the background, celebrating the Serie Project’s 15th anniversary, and implying that “a little bit of a boxing match goes on” in quinceañeras.