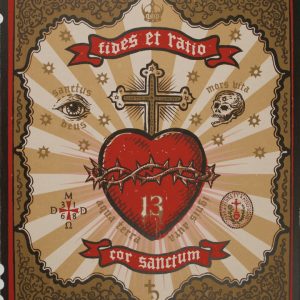 “To me, the most important thing about art is the subject matter,” says artist Daniel Martin Diaz. His serigraph titled Sacratus is imbued with text and symbols; some hold a strong place as decorative elements, while most exude an enigmatic quality consistent with Diaz’s mystical style.

Diaz was born in Tucson, Arizona, to Mexican immigrants who raised their son with traditional Catholic beliefs. “One of [Diaz’s] earliest memories as a child was the way death and religion played an important role in [his] family’s life.” The churches in Southern Arizona were dark and creepy, with blood-soaked idols that mirrored those to whom Diaz’s Grandmother built shrines in her home. The Native Americans who constructed Father Kino’s Spanish Mission San Xavier del Bac in Tucson left their own mark on the church’s interior, frightening youth with a spirituality akin to black magic. And how was a young Diaz to internalize viewing the bones of Jesuit Padre Kino, laid to rest in Magdalena, Sonora, Mexico? Visiting these hallowed buildings and praying to a punctured man hanging on a cross haunted Diaz’s young mind, and the hybrid Catholicism so prevalent in his childhood became the hallmark of his artwork as an adult.

“My first painting I made when I was 29, and it was the Virgin Mary hanging by a meat hook, and behind her was Christ floating in a surreal landscape…I said this is something real, something that was flowing out of me naturally. I just knew from that moment that this was what I wanted to do.” Pouring through library art books expanded Diaz knowledge and kept him from being indoctrinated by formal instruction. Northern European art, Byzantine art, Russian Orthodox, and the surreal all crept into Diaz’s imagination. He even constructs his own frames, drawing from medieval craftsmen, the Gothic, and the Spanish Mission style to create a complete artwork that is truly his own amalgamation.

A sacred heart floats in the center of Sacratus, embraced by a ring of thorns alluding to Christ’s terminal crown. The banner below labels the organ with the Latin text Cor Sanctum. Above, Latin text implores the viewer to have “faith in reason,” as per an encyclical penned by Pope John Paul II in 1998. A line of symbols unites to become the Russian word Illuminati, while Latin spells the four elements in an allusion to alchemy. Though not the largest image, perhaps the most salient is the omnipotent, sacred eye of God, which reminds the viewer of whom bestows life and death. Of the questions that arise upon viewing Diaz’s work, the artist says “I do not claim to understand these questions. I just paint and let them reveal themselves to me.”