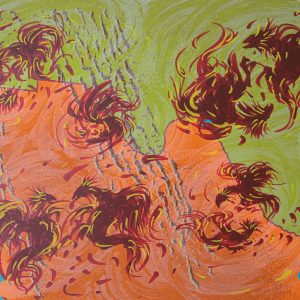 Born in Mexico and now living in San Antonio, Claudio Aguillon earned his B.F.A. at the University of Texas at Austin. Primarily a painter influenced by the Mexican Muralists, Aguillon says this print of fighting cocks over a map of the border between Mexico and the United States symbolizes the friction that exists between the two countries.