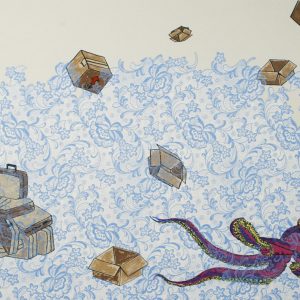 Raised on the Juarez/El Paso border, Claudia Rojas enjoys combining random images in her work and discovering how viewers connect the images. In her piece You’re Angry and That’s Human, Rojas explores the mystery and the fear that is often associated with deep-sea creatures such as the octopus that is the central image in this print. While indeed an octopus might not be a symbol of beauty for most, this one appears to be almost beautiful as it swims in a sea of delicate lace. The suitcases at the bottom of the ocean floor and the boxes, some closed and others open, further add to the enigma of this piece: why is the octopus angry? Is the octopus even angry? For Rojas, the fact that her work generates such types of questions is one of the things she looks forward to the most when she creates a piece. She wants people to form their own interpretations of her work and react to it, whether it be in the form of a smile or a frown. “I believe that art should awaken the senses,” says Rojas. “It’s pretentious to say that as an artist I will change the world because that’s not true, but at least I am going to make it look happier than it is.”

Rojas graduated from the University of Texas at El Paso in 2005 with a Bachelor of Fine Arts in graphic design and printmaking and is a graphic designer for UTEP’s Instructional Support Services.