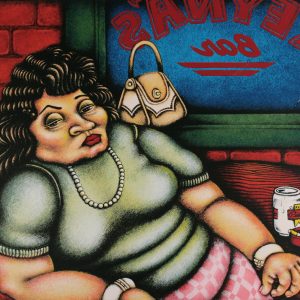 Celina Hinojosa began her artistic career as a pianist at the age of eight, but was drawn to paint years after beginning her music studies. She sold her first painting at the age of sixteen. Her formal art education began at Texas Southmost College in Brownsville, where she studied with George Truan. In 1985, she received her BFA at the University of Texas at Austin where she interned with illustrator Tom Curry. She continued her studies at Texas A & I University, earning her MS in art in 1991. Her career took her through various paths as lecturer, illustrator, instructor, and freelance artist. For several years she was employed as an illustrator of children’s books. Then, in 1996, Hinojosa returned to her original dream, to work as a serious painter. She paints subjects closely linked to life in the Rio Grande Valley, recording vignettes and scenes of daily living. Putting faces to everyday activities, such as cooking or passing time in a cantina, brings specificity and truth to what otherwise might be a forgetful moment.