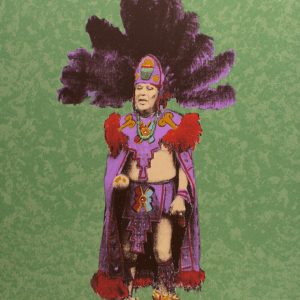 The history of art is no stranger to cultural pride. The world has endless examples of this pride exemplified by all cultures: indigenous tribes of Mexico celebrated nature with elaborate costumes and head pieces, just as the Romans revered the Greeks who had come before them. Likewise, today’s American artists are no strangers to their own unique cultures; if pride is a sin, then Arizona native Carlos Pineda will likely never repent. Chicanismo-or, the essence of being Chicano-has been a driving source of pride for Pineda throughout his extensive career in the arts. Born in 1939, Pineda learned from an early age that bi-culturalism would play a major part in his life-a role that eventually helped him to appreciate his Mexican lineage and American upbringing. Graduating from UT El Paso was merely a backdrop to the Chicano movements of the 1960s and 70s that Pineda saw first-hand. Having already established a preference for acrylics, Pineda eventually solidified his cultural pride by exclusively painting portraits of Chicanos. Pineda is also a purveyor of historical culture that he feels many Chicanos have forgotten over time. After moving to Austin, Texas over 25 years ago, Pineda met a group of ceremonial Aztec dancers who invited him to partake in their festivals. As a dancer, Conchero-Pineda gained a new found appreciation for his Chicanismo, one that he shared with Serie XI through his self-portrait, Ayer Andante Fui. Pineda, besides being a retired dancer, is also a grandfather who isn’t afraid to speak his mind, “To me, ‘melting pot’ is just a big myth; that is, what this country does is get outsiders to assimilate, because being assimilated is the same as murdering us. We lose our identity, we aspire to be just like [those from this country], and become Hispanic. I don’t consider myself Hispanic, just like I don’t call myself Herspanic.”