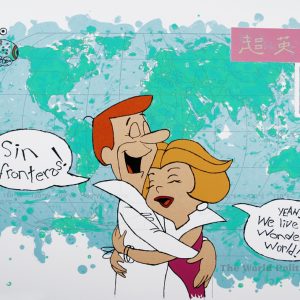 The print A Fairy Tale, represents Denver native Carlos Fresquez’s vision of the future, a place where borders of all kinds will be nonexistent and a time where world peace will prevail. The subjects in this print, The Jetson’s, or Los Supersonicos as they are called in Spanish, represent a future in which humans will get along with one another regardless of language or cultural identity. Indeed, just as all cartoons are dubbed to fit the language in the country they are aired in, George Jetson speaks to the audience in Spanish while he his wife marvels at the perfection of their world in English. However, as the title reveals, this idealic vision of humanity will never come into fruition; like Los Supersonicos speaking to us from the future, this vision will remain a mere fantasy as there are too many factors that will prevent this world from taking shape. Fresquez’s use of Aztec and Chicano-related imagery in the background make his print resemble an Aztec codex except that this one, with its cartoon imagery, is a modern day codex which takes notice of the past while keeping a keen focus of the future. A future which Fresquez hopes will most closely resemble the fantasy world Los Supersonicos reside in.