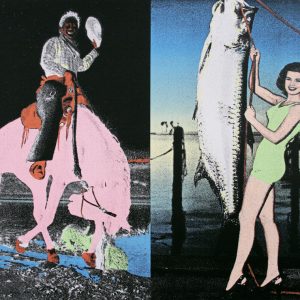 Austin native and resident Bob Wade received a B.F.A. from the University of Texas at Austin, and an M.A. from the University of California Berkeley. Bob Wade is the recipient of three NEAs and has been included in Biennials in: Paris, France, New Orleans, Los Angeles, and the Whitney Museum of Art, New York, N.Y. Wade Collects vintage black and white photo postcards and according to his sensibility, “brings them to new life.” Humor and irony pervades the work.