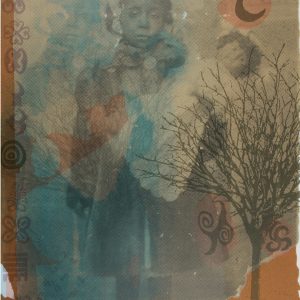 Sankofa “The Differences Between”, 2009
Screen Print
Edition of 50

San Antonio artist Bernice Appelin-Williams has always possessed an outrageous imagination. As an only-child, she created mischief by disassembling clocks and radios, drawing cartoons with charcoal sticks, and performing plays on cardboard stages with actors made of clay-like mud. She was loved by many and nurtured by teachers who introduced her to the opera and museums. She is a mixed media artist who “creates works that encourage self-examination, self-empowerment and self-healing.”

For Serie XVI, Appelin-Williams created SANKOFA “The Differences Between.” Sankofa is a West African symbol that means “learning from the past.” The central image is that of a young girl who’s identity is known only from an inscription on the original photograph that reads “Aunt Lillya’s niece, San Marcos, Texas.” Appelin-Williams discovered the haunting photograph while rummaging through a San Antonio house marked for demolition. On visiting museums in her youth, she says: “I didn’t see images that looked like me, or that represented African American art and artists.” Her own life experience made this photograph significant because the little girl is cradling a black doll, an unlikely scene for a photograph from the 1920’s or 30’s.

If one looks carefully, a second image of the melancholy girl is faintly visible. The artist uses multiple layers of the same image to allude to a parallel universe; in other words, the past, present, and future happening simultaneously. The indigo color through most of the print represents the Middle Passage, or the history of how both the artist’s and the subject’s ancestors arrived in Texas. The color red symbolizes life-blood, while the tree symbolizes life, death, rebirth, and family. In honor of Serie suite XVI, there are sixteen Andinkra symbols lining the left edge of the print. While researching the significance of the number “16,” Appelin-Williams became fond of a mathematical equation. She said, “While transcribing it, I kept getting it wrong, but I chose to leave the mistakes in the piece to show that we do make mistakes, as humans.”

Bernice Appelin-Williams was born in San Antonio and grew up in Cuero, Texas. She attended Columbia University in New York before receiving her B.A. from Incarnate Word College (now University) and her M.A. from Trinity University, both in San Antonio. Through her work, the artist hopes to “connect with [her] ancestral spirits and preserve as well as merge [her] ‘unknown’ past with [her] known and vibrant present while leaving an imprint for future query.”