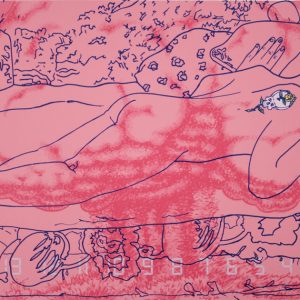 Benito Huerta’s print for Serie XV reinterprets the phrase “shock and awe.” The print consists of three layers; a digital countdown from fifteen, a reference to the Serie Project’s Quinceañera, is overlaid on top of a mushroom cloud from an atomic bomb explosion. Juxtaposing a nude young woman’s form, a visual quote from Gauguin’s Spirits of the Dead Watching, Huerta connects the notion of shock and awe as it relates to war with the viewer’s reaction to nudity. Huerta feels that one may feel horror at the sight of a destructive atomic blast while being fascinated with the cloud’s beauty. Similarly, people in today’s society are shocked when confronted with nudity but the taboo also inspires awe.

Shock and Awe is part of a series Huerta created that update famous paintings by adding tattoos and piercings to the subjects to make them more relevant in today’s world. Tattoos catch the viewer’s eye and contemporize Gauguin’s nude. One tattoo stands out against the pink: an image of a skull and yellow rose mimics the shape of the deadly cloud in the background and encapsulates the ideas of life and death.