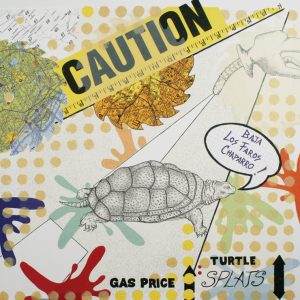 Life’s simple connections are what most appeal to Mexican-born Ann-Michelle Morales. Originally from San Luis Potosi, Morales and her work are a result of her Spanish, Irish, Czech, and Lebanese heritage. After receiving her BA from UT Austin, Morales went on to receive her MFA from the prestigious Art Institute of Chicago in 1997. Though educated in the US, Morales divides her time between Mexico, the US, and of course, making art. Through her art, Morales questions the art-making process as well as the connections between an image and the idea for it: “Investigating an idea and creating an image are synonymous. An idea begets an idea, which begets an image. The focus of my questioning and art making is to revisit or rethink that which we know as familiar and have come to expect.” Both in her paintings and drawings, Morales interplays daily customs with social patterns and language. And unlike many of her contemporaries, Morales even finds room to make her viewers chuckle: “Through the use of recognizable and fanciful imagery, color, and text-often deconstructed-I attempt to juxtapose an idea through a humorous yet effective approach.”