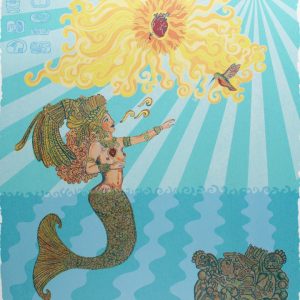 The lone star on Puerto Rico’s flag is a symbol for the commonwealth of the island nation. And like the star of her homeland’s flag, Anabelle Rodriguez shines just as brightly. Born in 1973, Rodriguez’s family of dancers and musicians fostered a culturally sound environment that to this day Rodriguez proudly portrays through her work. It’s no surprise, then, that Rodriguez would be an advocate of her country’s arts when she grew up.

In her teens, Rodriguez developed her creativity through drawing, painting, calligraphy and ceramics. In 1990 she arrived in the United States to pursue her undergraduate studies at Brown University where she concentrated in the crafts of jewelry and fashion design. Her son Sebastian’s birth in 1996 prompted her return to Puerto Rico where within a few months she was appointed Education Director at the Ponce Museum of Art, one of the world’s most comprehensive collections of Caribbean fine art. But the stars of America beckoned Rodriguez, who in 1999 accepted the position of Visual Arts Director of the Lorenzo Homar Gallery at Taller Puertorriqueno, Inc. Considered the “cultural heart of El Barrio” in Philadelphia, Rodriguez finds her curatorial experiences as yet another vehicle for creative expression. Today, her favorite pastimes still include music, dance, and of course, making art.