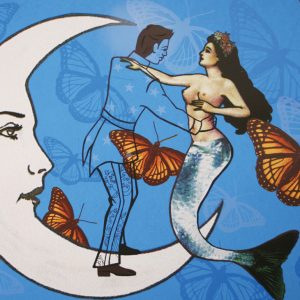 “A spirit, a dream, or a wish…or a hope” is how Mexican-born Chicana artist, activist, and visual storyteller Alma Lopez describes the central figure in her print El Vals de la Mariposas. This title is shared with a waltz that is commonly performed at quinceañeras, a party celebrating the fifteenth year of a young woman’s life. Along with the waltz, Lopez addresses multiple traditions with a complex symbolism that characterizes her artwork.

Traditionally, 15 couples perform the quinceañera waltz. In El Vals de la Mariposas, 15 butterflies dance toward the viewer from behind the moon and around the central couple in a flurry of activity that mimics the youthful energy of party-goers at a quinceañera. The butterflies depicted are of the Viceroy species, which Lopez chose because of its similarities to the struggles of the Latin-American immigrant population. Lopez’s original plans included the Monarch butterfly because of its migration patterns between the United States and Mexico; this pattern parallels how naturally Mexicans and other Latinos travel back and forth over a political border. This border is not strong enough to deter the fragile butterfly from maintaining such an ingrained migration pattern just as it is not strong enough to inhibit the genetic memory of people who have long traveled across the land. The Viceroy butterfly resembles the Monarch to vicariously benefit from its natural defense of tasting bitter to predators. For Lopez, “the Viceroy stands for difference and queerness, even within a community.”

The couple dancing on the moon represents la quinceañera and her chambelán, or escort and dance partner for the quinceañera. Lopez’s work frequently features images of the Virgin of Guadalupe and La Sirena. The images of La Sirena and the moon are both from the traditional Mexican game lotería. Although La Sirena as la quinceañera does not don the traditional formal gown, she does wear a tiara. Comprised of roses, the tiara alludes to the legend of the appearance of the Virgin to an indigenous boy in 16th-century Mexico. Lopez reconfigured the Virgin to represent el chambelán by dressing her in male attire with the stars and floral designs that commonly adorn her feminine robes. Lopez also depicts the Virgin with short hair, making her an androgynous chambelán. Like the ambiguous appearance of the Viceroy butterfly, the chambelán’s gender is vague. Even her existence is vague, as she is composed of outline only, careful to not deflect attention away from the true reason for the celebration: la quinceañera.