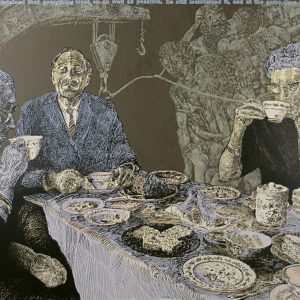 Born in Borger, Texas, artist Alice Briggs proclaims that her art stems from her desire to “cut things with a knife.” In fact, Briggs draws with a knife, an X-acto #11, and she represents the world using the method of painting and drawing known as sgraffito. The technique was popularized in Italy during the Renaissance and means “scratching back;” an artist leaves a coat of paint to dry on canvas or paper, applies another coat with a different color, and then uses a knife or stick to scratch out a design. Briggs believes our era is a great time for visual artists because of the wide array of resources available to them from the past and present, and she enjoys juxtaposing 14th century images with images from the 1950’s, for example, and see what unfolds. In her print Candide, Briggs gives viewers the haunting image of three satisfied and calm individuals having a tea party while completely disregarding the hellish figures that are longingly looking at them. Briggs describes the print as being a portrait of North America in action and, thus, a commentary on the state of affairs that exists today. The quote at the top reads, “having once maintained that everything went on as well as possible, he still maintained it, and at the same time believed nothing,” describes the central figures, like North American citizens, as being unaware of the horrors that loom behind them. “American society is unaware that we have an isolationist view of things, yet we insist that everything is terrific as long as things like gas prices don’t go too high or interfere with our present circumstances,” she says. However, as an artist, Briggs wants her work to be suggestive and for people to form their own interpretations of her work. She adds, “I have learned more from viewers’ responses to my work than I have from my own work and ideas.” Currently, she has plans to collaborate on a nonfiction graphic novel about Ciudad Juarez, Mexico. Briggs received a Master of Fine Arts from the University of Iowa in 1981.