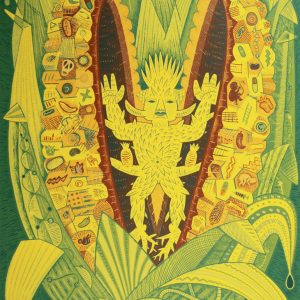 A Mayan legend tells of a defenseless corn god whose survival depended on man who weeded out plants that robbed corn of nutrients, who scared off predators, and who gave life to the god by planting it. In gratitude, corn fed man. Biologically, the myth isn’t far from the truth: of all known plants only corn is dependent on man for reproduction. The grains and seeds firmly attached to the cob and wrapped by thick husks make it impossible for the plant to grow on its own, which is why modern forms of corn cannot exist in the wild without genetic engineering. Serie XIII artist Alec Dempster responds to these advancements in the field of generically modified vegetables in his piece, “Maiz Moderno” (“Modern Corn”). The image is part of a series Dempster has worked on to illustrate his huasteco identity. Huasteco is a name given to individuals from the northern parts of East Mexico where mountains and coast meet to infuse the people there with a unique form of music and dance; Dempster illustrates this identity with the representation of a god of corn emerging from the cob. For the artist, the outside of the plant represents the way traditional cultures adopt and resist new influences, represented here by images of capsules, syringes, and copyright symbols. Dempster is a printmaker and painter whose heritage is as varied as the images surrounding his corn god.

Though born in Mexico City, raised in Toronto, Canada, and born of French and English parents, Dempster currently resides in Xalapa, Veracruz, Mexico where he continues to create art that is accessible to a wider audience than that which frequents galleries. He holds a B.A. in Fine Arts from York University and recently secured a grant from the Mexican government to record a CD of traditional, huesteca songs known as “sones jarochos.”