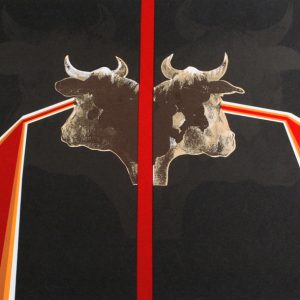 With exhibit names like “Man Made Men,” “The InSide,” and “Turn On,” it’s no surprise that a name like Adreon Henry’s is one that continues to grow with each year. As an Austin-based artist, Henry’s career has exploded since graduating from UT in 2002. Commissioned by doctor’s offices and musical bands, Henry received local acclaim last year when he sold more paintings than featured artists at the Science102 group exhibition. The uniqueness of Henry’s compositions is quite possibly just one of the reasons for his success. Ranging from paintings to photography and even light fixtures, Henry’s most unusual work is silk-screening on vinyl surfaces. Denying any physical contact with the paint, Henry’s silk-screening process is noted for simultaneously engaging and alienating viewers. While the twenty-something Henry primarily focuses on silk-screens, he especially engages himself in his “found objects” works. “If the concept of synthesis is combining separate elements or substances to form a coherent, complex whole,” Henry says, “then what is more complex than combining discarded human artifacts into the culmination of light?”