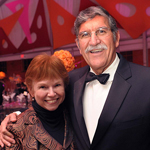 “We didn’t expect something as broad as this,” says Dr. Romo. “We felt that we had devoted a lot of time and effort into collecting it, and we appreciate that someone could look at this and say that this is important to this community and beyond.”

Lyle Williams, who became the McNay’s first curator of prints and drawings in 1992, has produced various publications including Pattern and Invention: Ornament Prints, 1500–1800; Kent Rush: A Retrospective, 1970–1998; From Goya to Johns: Fifty Master Prints from the McNay Art Museum; and Mexico and Modern Printmaking: A Revolution in the Graphic Arts, 1920–1950.

With William’s extensive research in printmaking, particularly in the history of Mexico, there isn’t a more ideal curator for this exhibition of works art from the collection of Harriett and Ricardo Romo. “Estampas de la Raza” features  their recent gifts of contemporary Mexican American and Latino prints to the McNay.

“A lot of the posters and images that are projected in Chicano art tell the history of the community and what’s important, and what the issues are in those communities,” explains Mrs. Romo. “What is Chicano art? It is the protest, it is the anger and the hostility that they experience in urban communities. But it’s also the loving families, the closeness of the families, the traditions.”

More than 60 prints by 44 artists reveal the richness of a mixed cultural heritage, with depictions of Frida Kahlo, lowriders, tattoos, and the Virgin of Guadalupe. The exhibition focuses on aspects of the Latino experience in the United States: the celebration of a mixed “identity”; the Chicano Movement’s “struggle” to achieve sociopolitical equality; “tradition, memory, and culture” in the everyday lives of Latinos; Latino “icons”; and “other voices” suggesting the diversity of the community. Many images are larger than life, serving up a colorful, visual feast.

“I think there’s a great advantage if you approach art from the perspective of, I like this work, I think it has some historical meaning to it, rather than to say, this could really be a valuable piece,” explains Dr. Romo in the interview with Williams. “This is really important for the history of Mexican Americans – it tells a story about immigration, and this is a political story, and this a story about education, this is a story about people struggling in the fields. We have a pretty complete story of much of what’s important to the Mexican American community told through art.”