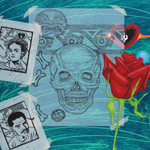 Common Practices for Day of the Dead

Day of the Dead is annually celebrated on November 1st and 2nd. The first day, called “Día de los Angelitos” (Day of the Little Angels), is dedicated to the souls of deceased children, while November 2nd is set aside for the souls of adults. In preparation for these days, families may clean their homes to welcome the arrival of the souls of their loved ones. Many people also visit cemeteries to decorate the graves of the dead with their favorite items and flowers. 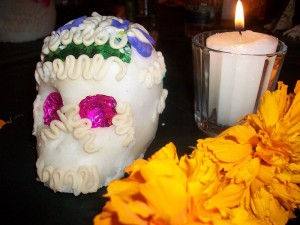 Cempasúchitl, Candle, and Calavera on Ofrenda

Graves and ofrendas are decorated with papel picado, photographs, cherished objects, marigolds (cempasúchitl), and skeletons made of paper or clay. Food and drink are placed on the ofrendas for the dead – people commonly believe that they can still enjoy the tastes and smells.

There are many important foods associated with Day of the Dead. The main dish is typically mole, which consists of meat (usually chicken or pork) cooked with a sauce made from chilies, chocolate, peanuts, and other ingredients that vary by region. Pumpkin candies, rice pudding, and tamales may also be offered. Bakeries produce special bread called pan de muerto (bread of the dead) in the shape of people or bones, decorated with pink or colorful sugar. Candy stores also sell skulls made of sugar or chocolate, adorned with names, for both children and adults to enjoy.

Various artists who have done their residency at the Serie Project have made their own interpretations of the Day of the Dead tradition and its meaning in their screen prints. Below are three examples. 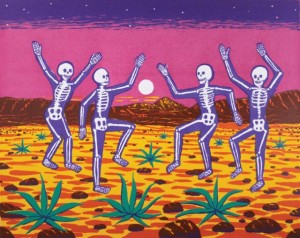 Austin artist David Martinez began painting canvases in his mid-forties, after expressing himself through various kinds of craft work. He has followed the ideals of tribal people in his life and art, which is genuinely affected by indigenous cultures immersed in nature and art. Martinez’s piece, Fiesta de las Calacas illustrates a story about four ghosts who have a reunion party every year when the moon is full on the night of the Day of the Dead. Characters fling their bones into a tight dance and sing their fate to the empty desert. 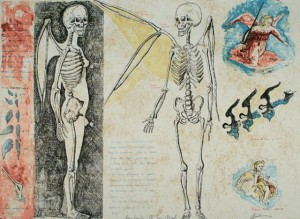 Aldo Valdez Bohm earned his Bachelor of Art degree at Southwestern University in Georgetown, Texas, focusing on sculpture and ceramics. Valdez Bohm explains that this is part of a body of work in which he explores the skeletal anatomy. Reflecting on the imagery from the Italian Renaissance composition of angels, Bohm is hoping to “understand” the physical aspect of angels. 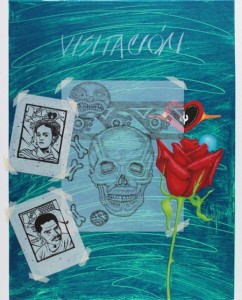 Rudy Fernandez is a sculptor and visual artist, currently living in Dallas, Texas. He received his BFA from University of Colorado, Boulder, and his MFA from Washington State University in sculpture and painting. He often works in mixed mediums to create three-dimensional contemporary altars, using elements and symbols associated with religion and Latino culture such as roses, hearts, skulls, etc. His work is vibrant and full of life. Visitation: Modern Heroes is a memorial for his deceased brother. It also includes a picture of Frida Kahlo, and various other elements that create a collage of memories and color.