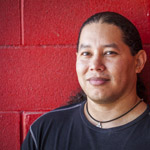 What Time Is It There?
J. Salvador Lopez
CLICK HERE TO BUY

Born in Long Beach, California, J. Salvador Lopez has lived in Texas since the age of eight, residing between Dallas and San Antonio. Lopez studied at San Antonio Arts Institute and Mountain View Community College. An active exhibitor, of his work he says he wishes to express his ideas and beliefs by creating a bridge between human trials and exploration of the spirit. He sees it as the glorification of what life can give to us and the tragedy of what it can take away.

“I’m a self-taught painter, but I’ve had formal training,” says Lopez. “My growth has been difficult since I have been constructing themes which are very personal and original.”

Lopez has been influenced by a variety of art movements, including Romantic, Mannerist, Surrealist, Dada, Gothic, Pre-Columbian, Post-Impressionist, Renaissance, Post-Modern, as well as diverse cultures such as Japanese, Chinese, Indian, Native American, Russian, African, and the art and culture that emerged from the Mexican Revolution.

Lopez works in a variety of mediums: watercolor, pen & ink, pencil, pastel, gouache, oils, acrylic, tempra, and airbrush. He identifies primarily with his drawing, although he is well regarded for his talent as a painter.

In describing the piece he recently created for the Serie Project, Lopez says, “My work has an ongoing theme: relationships between Man, Woman, and God and how they react to one another. I use an onset image to interpret and symbolize the larger image and vice-versa.”