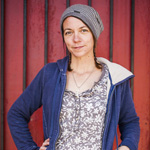 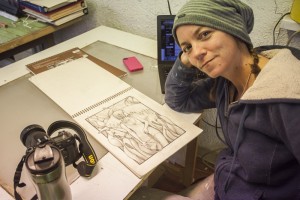 Drawing from her first love of war propaganda illustration and Victorian history, Farley Bookout is driven to create imagery of pensive women in lonely spaces, reminiscent of a vintage screen print. Bookout began drawing at the age of 12, inspired by the horses she owned and the desire to capture their weight and beauty. Finding she had a knack for it, she took classes in high school and the nearby Rhode Island School of Design. Her father also owned many art books with Civil War paintings, WWI propaganda posters, WPA posters, and plates of large Leyendecker and Rockwell images.

“I lived in an old, dusty Victorian that had once been a girls’ school, and I was convinced that it was haunted,” says Bookout. “I found old school books in the hidden cabinets in our living room, which had once been the school’s library. I believe all of these things affected me profoundly in the way I see the past.”

What Bookout strives to do with her work currently is to equate the past with the present/future of the human condition, particularly that of women, and how their roles might have changed in the last hundred years. 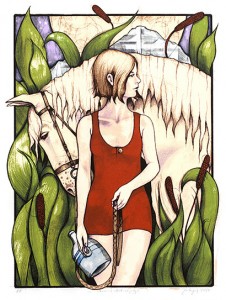 “There is still a resounding perplexity about exactly where a woman fits into her societal or familial role,” explains Bookout. “I have felt drawn lately to Chinese history and women, and their changing roles, as my daughter grows up, and I try to preserve her heritage.” (Bookout’s daughter is adopted from Taiwan.)

Bookout majored in photography at the University of Texas at Austin. She would spend countless hours in the dark room, “building a story through fuzzy glasses.” She would use pantyhose, bleach, vaseline, and overlays to soften her subject.

“Now as an illustrator and printer, I have found a way to keep that same softness by keeping the sketch lines and lead pencil hand smudges and eraser marks and even margin notes,” says Bookout. She feels that if her images are too clean, there is little space for the viewer to enter and discover her work for themselves.

“I want them to find their own story,” says Bookout, “a story that they want in their own lives.”

Bookout and her husband own and run an illustration, design, and screenprinting business in the heart of Texas, specializing in gig posters, called Empire Press.